To My Beloved Followers:
The French Stench officially has a new home, which is very exciting. I've transferred all of my previous posts to it, that's where I'll be updating it from now on!
Check it out at:
http://tyleratwoodphoto.com
Much love,
Tyler
Posted by Tyler at 12:01 PM No comments:

another sunday, another week

It’s hard to believe I began my daunting trek back to France only a week ago. The passage of time – or rather, my perception of it – is peculiar in the Bubble that is Lannion. It didn’t take long for me to get back into the swing of things, to readapt to the vie quotidienne as it were, so it feels like I’ve already been here for ages.

In short, this week was all about reunions. Karen and I coincidentally crossed paths at the train station in Paris, and since we were both zombies from traveling, the chance meeting elicited a dud of a reaction. It was a strange, slow-motion kind of Oh hey, it’s you, this is kind of funny moment that didn’t really convey our mutual excitement. Fiona and I enjoyed a less spontaneous catch-up session over vin chaud and chocolate-covered Speculoos cookies at this kitschy bar in town called Le Scopitone on Wednesday. And on Thursday night, Heledd and I reinstated our routine of cooking dinner together (I use the term “together” here loosely; not that H. isn’t a great sous-chef, but let’s be real: Tyler’s the one who cooks around here). Of course, I was also reunited with my students this week, and I was particularly glad to see my little ones. As they walked into the classroom on Friday morning, many of my CE2s asked me (accusingly) why I hadn’t been there on Tuesday; their teacher winked at me as she told me that they were all pretty worried when I didn’t show up. So cute.

My week of reintroduction into French social life culminated last night as I attended a dinner party thrown by Slim, a Tunisian fellow who has somehow managed to befriend the last three or so generations of language assistants in Lannion. We were quite a cosmopolitan group sitting around the dinner table, twelve of us representing nine countries: Slim the Tunisian, as well as 3 Spaniards, 2 Frenchies, a German, an Austrian, a Venezuelan, a Welshy, an Italian, and me, the lone American. Part 1 of the soirée included a delicious couscous dinner and drinks before we ended up moving the whole gang to my apartment for Part 2, which included games like Times Up (the love child of Taboo and charades…kind of) and Jungle Speed (a high-energy/high-stress/potentially violent card game involving shapes and colors and a little wooden totem). It was a casual and fun Saturday evening with both familiar and new faces. It was also an excellent reminder of the kind of rich cultural exchange a program like this can cultivate. Here's to hoping that 2012 is full of these kinds of multicultural, melting pot experiences!

The upcoming week looks promising as I sit here with a hot cuppa tea, listening to the strong gusts of wind outside my window. Tomorrow, I'm accompanying some of my primary school students on a field trip to the hospital, where a bunch of decorations they made before Christmas are hanging in the halls. Tuesday, I have to go to Rennes for a medical visit through the Office of Immigration (cross your fingers I don't have TB, y'all! that's what they're testing me for), and I'm spending Tuesday night in Guingamp to catch up with some of the assistants there, since I'm back to having Wednesdays off! No pictures to post for now; unfortunately, I left the charger to my new digital camera at home, but Mom sent that to me a few days ago, so expect some good ones soon!

Until next time, bisous from the Stench.

Happy Holidays from the Stench! I’m going to ignore the fact that I’ve totally failed to keep this thing up to date over the past several months. One of my New Year’s resolutions is to write more, so let’s just forgive, forget, and dive into the new year together!

During Christmas Eve dinner, I made everyone share their favorite part of this holiday season. Mom and Dad were both happy to have everyone together; Jessica enjoyed wrapping all of her presents (you should have seen them, each present meticulously crafted into a piece of art!); Seth liked putting lights on the house and tree with Ashley, whose favorite part was decorating the tree as a family (Ashley always gets sentimental as we dig through the boxes of ornaments collected over the years); Blake had fun making and eating hors d'oeuvres for the usual Christmas Eve finger-food feast. As for me, my favorite part was getting to experience the season in two countries. Lannion was enchanting, even if rainy, before Christmas: twinkling lights strung across every street, carols playing through the town speakers, mulled wine being served on street corners, the Christmas market in the town center. And of course there’s nothing like Christmas at home: baking cookies and cupcakes, fighting crowds of last-minute Christmas shoppers at Barrack’s Road and the mall, sitting around the game table with family and friends. It was all truly perfect.

Here are some photos taken with the Canon Digital Rebel I got for Christmas! Can’t wait to use it to document new adventures in France, Belgium, and Lithuania in the foreseeable future (who knows where it'll follow me after that!): 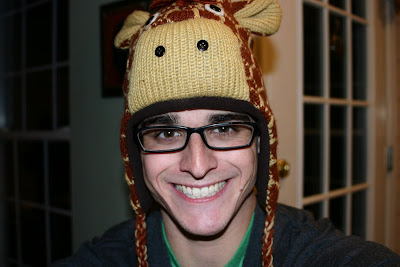 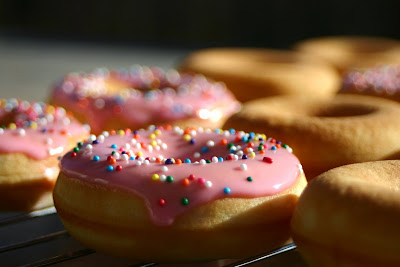 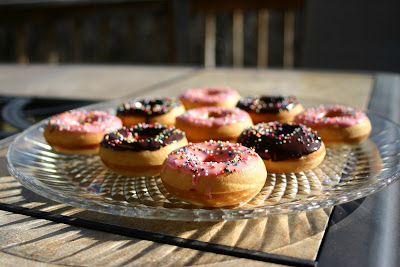 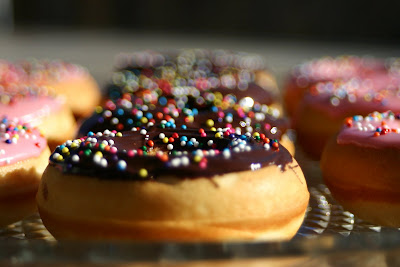 I'm not sure why, but I am SO into Thanksgiving this year. Perhaps it's because I'll be thousands of miles from my own Thanksgiving table, but I am really freakin' excited to go all out. I'll be celebrating it Friday rather than Thursday (home boy doesn't finish until 5:30pm on Thursday...there's no way I'd be able to throw together a proper feast in time for dinner), and since I'm the only American I know of in Lannion, I'll be whipping up some good ol' 'murrican dishes for my European friends: stuffing, mashed sweet potatoes, green bean casserole, duck (yeah we fancy up in here), and, of course, apple pie! But I'm getting ahead of myself.

The real point of this post is to show off the hand turkeys my CE2 class made today! I gave them a REALLY simple explanation of Turkey Day, complete with visual references I drew myself of the Mayflower, a Pilgrim, a Native American, and a Turkey. I can only imagine how alien they think I am now (YOU try explaining the importance of turkey to a bunch of French 8-year-olds). Anyway, no elementary school Thanksgiving lesson is complete without some good ol' fashioned hand turkeys, so hand turkeys we made! I gave them some basic guidelines, but some of them got super creative! I LOVE them all and want to hang them on my wall. Without further ado: 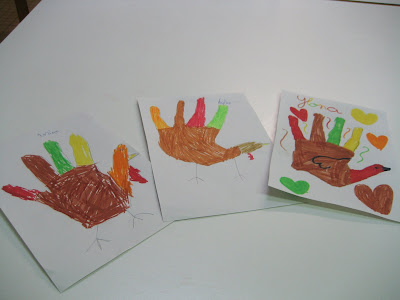 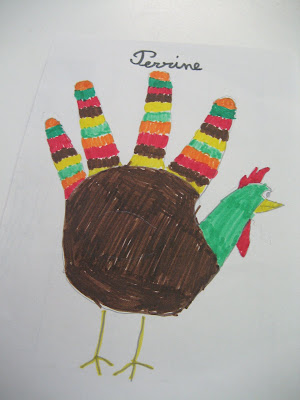 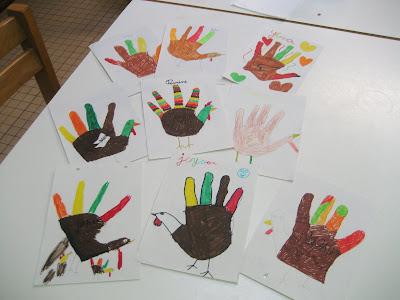 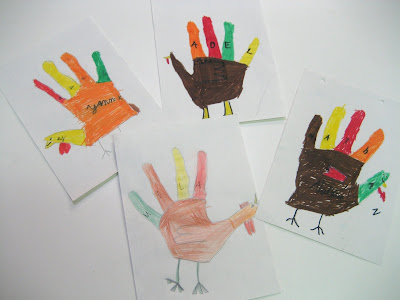 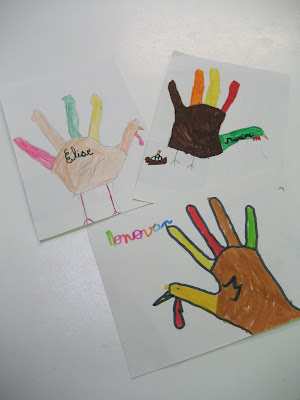 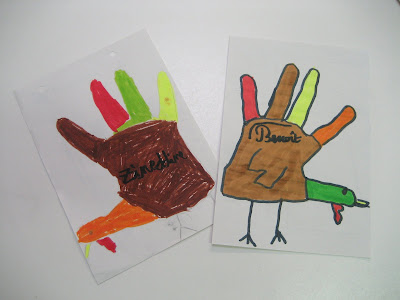 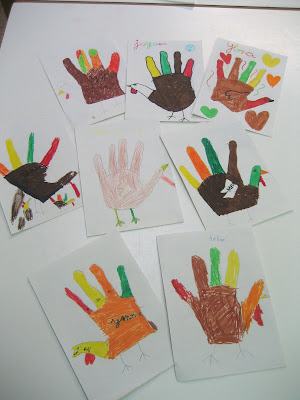 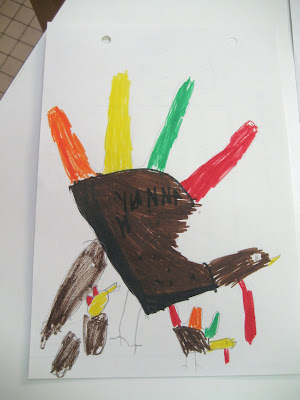 (Turkey family! That's a turkey hatching out of an egg there on the left...) 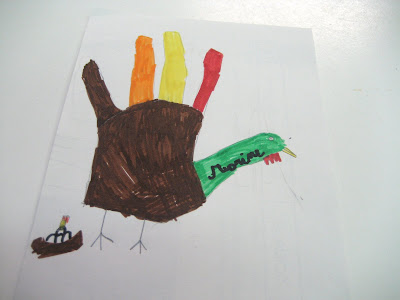 (Do turkeys have nests? Marine's does!) 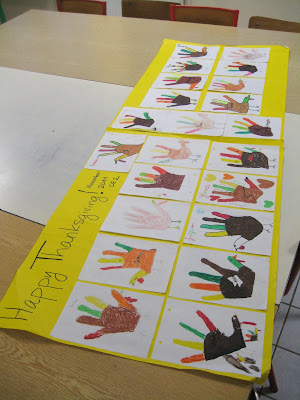 I'm famous! This short article and photo appeared in the regional newspaper Ouest-France a couple of weeks ago. The basic gist of the article: a bunch of French nerds are here to teach little ones English. (The photo features only those of us working in ecoles primaires. There are actually about 30 English assistants throughout the Cotes d'Armor department of Brittany once you take high school and middle school into account.) 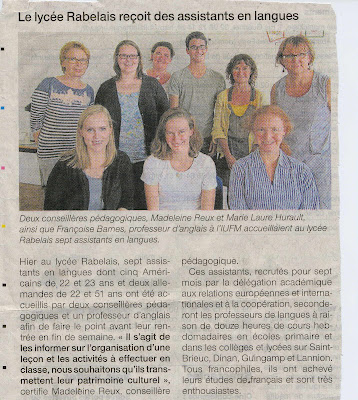 Love how the quality of the image makes me look like I have braces and am therefore 15 years old.
Posted by Tyler at 2:47 AM 1 comment:

on being responsible for formative minds

I’ve been in France for two weeks and already I’ve had a visitor from the States! Anthony, a friend from the great state of Texas, has been traveling around Europe since he ran the Berlin marathon two weeks ago. And since his flight home left out of Paris, he decided to come to little ol’ Lannion for a couple of days! Below are some pictures from the day trip we took to a place called Ploumanac’h on the coast. It was beautiful, and I was glad to see the sea, as I live just kilometers away from it, and of course it’s what makes the region famous. We walked for several hours along the Sentier des douaniers, a meandering footpath 19kms long right on the edge of the water. Historically, it was where customs officers patrolled the coast. The sights were unlike anything I’ve seen before, and there was something almost enchanting about the contrast between the pink granite rocks and the blue-gray-green water (In fact, the Breton language has its own word for this color: glasz.) Even the wind seemed other-worldly. 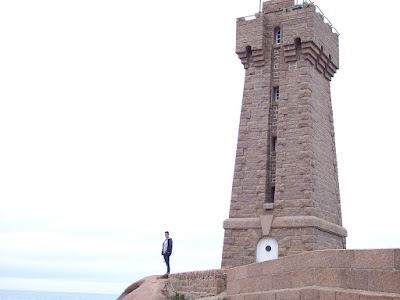 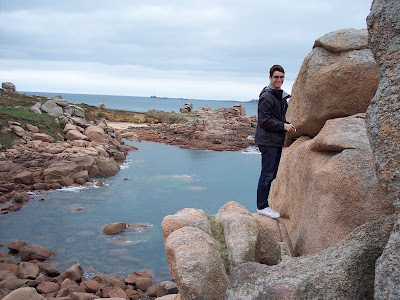 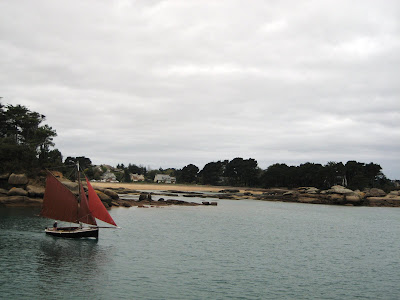 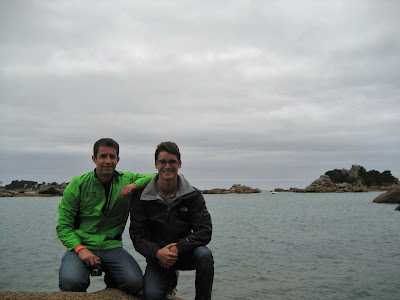 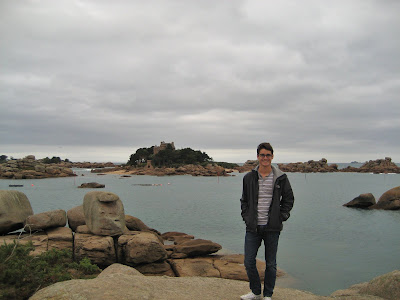 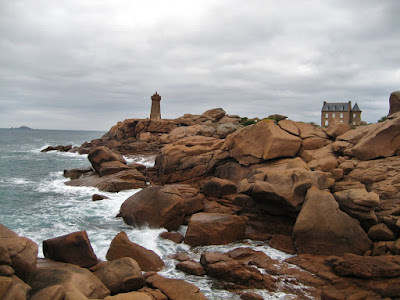 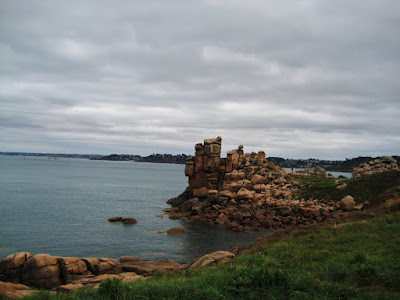 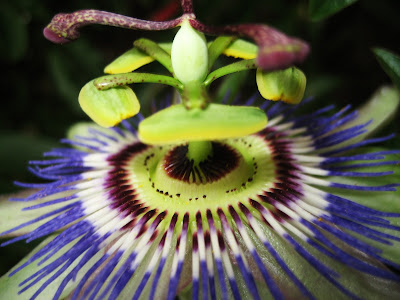 In other news, it’s official: I’m an elementary school teacher (say WHAT?!). I taught – and survived! – my first two classes today. I’ve been placed in three schools, two écoles primairesand one lycée (high school). At the lycée, I’ll be doing what I actually signed up to do – that is, assist. I’ll lead discussions with small groups of students to supplement what they’re learning in class and get them to apply the language. At the écoles primaires, however, I’ve got a lot more responsibility. I am THE teacher. As in, they have given me two classes and expect me to teachthese children English. I’ve got one CE2 class and one CM1 (the equivalent of second and third grade), and the age of my students ranges from 7-10. There are 23 of them in one class and 16 in the other. Again, WHAT?!

Needless to say, I was a nervous wreck this morning. I had no idea how to prepare for class, as I had no concept of how much English they’ve already learned. Not to mention I’ve got almost zero teaching experience and even less experience working with children. It was overwhelming and challenging, but I can already tell it’s going to be such a positive and rewarding experience for me. It’s going to push me out of my comfort zone in such a good way. I do, however, feel a lot of pressure to be the kind of teacher and role model these kids deserve. I’ve been told that many of them are “en difficulté” – that is, they come from single-parent households and lack in particular a male role model. It’s going to require a lot of effort on my part, but today’s classes left me feeling so motivated, and I look forward to seeing how the students (and I!) evolve. They are so cute and eager; this morning they walked single-file into the classroom and stared at me all wide-eyed and curious, timidly muttering “bonjour” to me under their breath. We went over simple things like “My name is,” and the names of colors, and I’m already impressed by their level of comprehension – or at least their responsiveness/ willingness to react and repeat. And of course I love walking through the halls, the walls plastered with indecipherable drawings, everything so colorful and miniature!

Anyway, my computer's about to die, and I don't have my charger with me at the cafe. Signed up finally for internet, but we still won't have it for 5-15 days. Oof. It's been a long, exhausting week, but now it's the weekend! Heledd, a friend and fellow assistant from Wales, and I are heading to Guingamp this weekend. Updates soon!